This programme is designed for those who need to grasp the foundations of cybersecurity, and subsequently plan and conduct vulnerability assessment and penetration testing.

The first module covers the foundations of cybersecurity, and explains important key cybersecurity concepts and basic techniques, including: cryptography, Public-Key Infrastructure (PKI), secure channel using TLS/SSL, network security protocols, access control in Operating Systems, secure programming, as well as Web security. It also illustrates the fundamentals of how systems can fail due to malicious attacks, and how they can subsequently be protected and hardened. Several cybersecurity tools are also used to demonstrate how relevant cybersecurity techniques can work in practice.

The second module is practice-oriented which demonstrates how cyberattacks can target hosts, networks, and web servers. It also demonstrates how the target systems can subsequently be hardened. With its hands-on approach, the module puts cybersecurity knowledge and concepts into practice by employing various offensive and defensive tools in attacking and defending systems, respectively.

At the end of the programme, the learner will be able to:

Mid-career PMETs and anyone would like to take up the role as Associate Security Analyst / Penetration Tester / Cyber Incident Investigator. 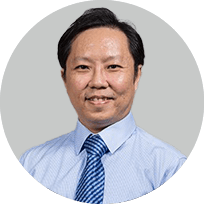 Dr Sufatrio is a Lecturer with the School of Computing (SoC) of the National University of Singapore (NUS). He obtained his M.Sc. and Ph.D. in Computer Science from SoC, NUS. Previously, he was a Scientist and Acting Lab Head of the Mobile Forensics & Security Lab, at the Cyber Security & Intelligence (CSI) Department, Institute for Infocomm Research (I2R), A*STAR. Prior to that, he was an Associate Scientist and then a Research Scientist with the Temasek Laboratories at the National University of Singapore (TL@NUS).

He is interested in many areas of computer security, and have published numerous papers on systems, network and mobile security.

For members of public and NUS Alumnus (without R&G Voucher), please follow the steps below:

Please download the user guide for NUS Online Application Portal after you click ‘Apply for Myself’ if you need assistance.